Showing posts from November, 2014
Show All

Why do tigers pace?

- November 26, 2014
Tigers, like all captive animals, can tend to pace back and forth as a way of coping with the stress of captivity. Due to stress, captive wild cats breed poorly, which is why it is hard to maintain population levels in zoos and also why zoos are bad because the cats are sometimes imported from the wild. The Born Free site says cats breed well in captivity. This is incorrect in my opinion. You'll see human prisoners in confinement in their cell for 23 hours in a day pacing in the same way. It is obviously therapeutic. I wonder if they copied it from captive animals in cages or whether it just happened naturally. Sometimes you'll see stand up comedians on stage walking back and forth. It seems to help delivery. Why does pacing ease stress? I am not sure. It probably distracts the mind as the mind has to work to a certain extent when pacing. Pacing may be a form of displacement behaviour much like nail biting in humans and nose licking in cats. It displaces anxiety and unce
Read more

Do tigers live in the Amazon rainforest?

- November 24, 2014
No, the tiger lives in Asia - in 2014, from East India to the far east of Russia. The Amazon rainforest is in South America. Another big cat lives in the Amazon rainforest, the jaguar. In size, the jaguar is third largest after the tiger (1st) and lion (2nd). The jaguar has the strongest bite of all cats. The puma also lives in S. America.
Post a Comment
Read more

Why do tigers attack humans? 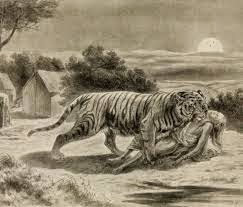 I can answer this question without referring to books or doing internet research because it is fairly obvious. Firstly, humans are not on the list of prey items of the tiger. The tiger does not prey on the human. It is common sense, I guess, because the human is the top predator and beats the tiger. The human is the only animal that beats the tiger routinely. If a tiger attacks humans there has to be some good reasons and there are. The tiger is desperate. Man-eating big cats including the tiger are often infirm, old, injured and/or forced to come into contact with the human because they can't find a home range. They are beaten by other tigers in finding a place to live. If a tiger is hungry and unable to find its usual prey because it has been killed by people and if the tiger has been injured by people or old then if the tiger comes into contact with people because, due to a lack of space they are forced together, the tiger may attack the human for food. When this hap
Post a Comment
Read more

What do tigers do for fun?

- November 23, 2014
Tigers will occasionally play for fun. You can see tigers playing with their offspring, for instance and of course you'll see sub-adult (young) tigers who are siblings romping around together sometimes. That said, the concept of "fun" is probably not part of the tiger's psyche. The adult tiger doesn't really do "fun" like domestic kittens. However, you will see tiger cubs playing just like domestic kittens because they are practicing hunting skills and learning through play. Domestic adult cats only play for fun as a substitute for being unable to hunt. So, in conclusion, I'd say that the adult tiger does not look for "fun". They are focused on survival in a very difficult world to survive in.
Post a Comment
Read more

Tigers are native to what country?

Nov. 2014: The tiger is native to many countries where it no longer exists so we can't simply point to countries where it is found and say it is native solely to those countries. The tiger's range has been hugely reduced in recent times. It once extended across Asia from eastern Turkey and the Caspian Sea and going eastward south of the Tibetan plateau to Manchuria and the Sea of Okhotsk. It is extinct in Turkey, Northern Iran, Afghanistan and the Indus Valley of Pakistan. The tiger was once common over the foothills of the Himalaya through Nepal, Sikkim (state of India), Bhutan, Assam (state of India) and Myanmar (Burma). These are some of the countries and states of India where the tiger is native.  The great Sundarbans tiger reserve straddles India and Bangladesh. The tiger was once widely distributed in Laos, Thailand, Vietnam, Cambodia and Malaysia. These are also countries to which the tiger was and is native. The tiger was abundant in Korea but now possibl
Read more
More posts