Showing posts from April, 2016
Show All

How many wild tigers are left in the world?

- April 30, 2016
At April 2016, they (the experts 1 ) say that there are an estimated 3,890 in the wild 3 on planet earth but note the word "estimated 2 " and note that the number will change from month to month and year to year. The change is usually downwards because the tiger is endangered due to human activities. They say the tiger population is bouncing back . I say there is a lot of political pressure to talk up tiger numbers. The pressure from human activities (poaching, loss of habitat etc.) is greater than the desire to talk up numbers. The long term prognosis is poor unless there is a radically different approach to humankind's relationship with all wild species. This change must come from the default desire for perpetual economic growth which invariable means diminishing tiger numbers. Business takes away tiger habitat - bye bye tiger. Business beats conservation. Economic growth = less wild life on the planet. There is no denying that simple formula. And we must not for
Post a Comment
Read more

Is the Tiger Population Really Bouncing Back As Nations Fight Illegal Trade? 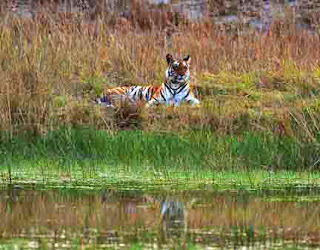 The newspapers tell us that the tiger is starting to bounce back as nations fight the illegal trade in tiger body parts. They say that after more than a century of unrelenting bad news for tigers and the tiger population in the wild, the species is finally beginning to recover from the brink of extinction. Big words. Big ideas. The message is hopeful and optimistic but is it justified? The World Wildlife Fund for Nature (WWF) compiled tiger population numbers from the International Union for Conservation of Nature (IUCN) data and recent tiger surveys by some countries. They are confident about their figures. However, they are estimates. Counting tigers is difficult. In the past there has been a lot of missed counts and poor estimates. Also, I don't rate the IUCN. For me, they are asleep on the job. The WWF are confident that the actual number of wild tigers has risen since 2010 but they are unable to say by how much. That is not going to give us confidence that they have
Post a Comment
Read more

- April 18, 2016
Do tigers purr like domestic cats? The short answer is No! They have a wide range of sounds, many of which travel long distances. The tiger does meow. There is an overlap there with the domestic cat! I have a page on the sounds a tiger makes . Sorry that this is so short but there is nothing more for me to say! Except... To mention an interesting little point: it is said that the tiger roar is not a true roar and that the tiger is not one of the roaring cats (Gustav Peters). Figure that one out! It sounds like a roar to me. Let's say the tiger roar is different from the roar of the lion, leopard and jaguar.
Post a Comment
Read more
More posts