Showing posts from October, 2020
Show All

Different uses are made of various parts of the tiger's body 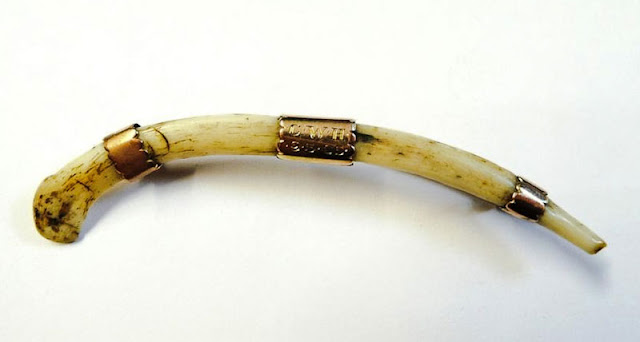 Even today in Asia tiger body parts are still extensively used by people to improve their well-being or status, or so they believe. The Chinese are particularly involved with this. The body parts are also often used in Chinese traditional medicine. However, you can go back a very long way indeed throughout history to see how humankind's reverence and admiration of the tiger has often been its demise. It is very odd that animals that people admire end up being killed by people because humankind likes to possess or eat a piece of that animal thinking that it benefits them. Tiger clavicle bone as a brooch. Photo: Tennants Auctioneers. For example, the tiger clavicle bone was often turned into a brooch. You can see one in the photograph above. This particular brooch is mounted in gold metal with a pin fastener. It is 7.5 cm long. A very small bone for such a very large predatory animal. This is because its reduced size allows the tiger to stride longer and therefore move faster.
Post a Comment
Read more

How much land do tigers need?

How do tigers kill their prey? 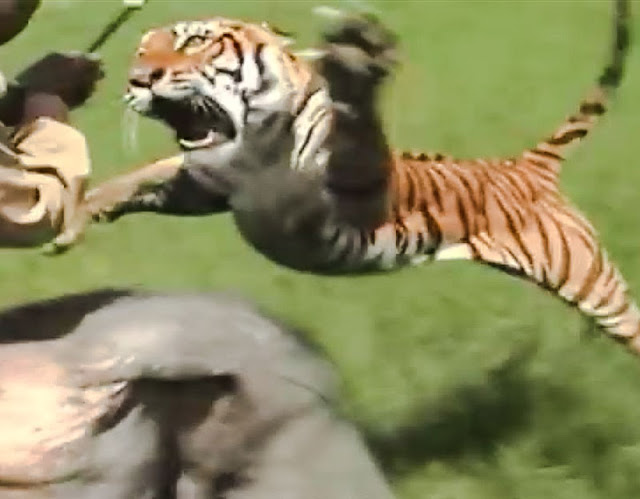 Tigers use their black-striped orange coat as camouflage. Some people might find it hard to imagine the tiger coat as an effective camouflage but bearing in mind the wide range of landscapes in which they hunt it works well . A tiger approaches its prey stealthily and up wind using available cover. It will make a last minute dash to deliver a blow with its massive foreleg. The tiger's dash will be short at about 30 m in order to improve the chance of success as it will struggle to maintain top speed over distances much longer than this. Tiger attack taken from a YouTube video Large animals It knocks the prey down and then grabs the animal with the sharp claws of its four paws. At the same time it clamps its jaws around the prey animal's throat to suffocate it. Sometimes tigers keep its jaws clamped around the throat for longer than necessary and past the moment that the animal has died. It will then drag the carcass to a safe place to eat it. Tigers have enormous strength an
Post a Comment
Read more 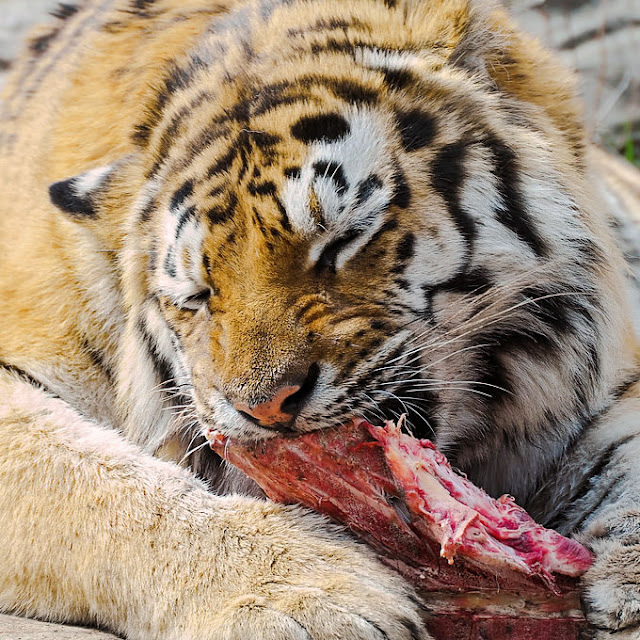 Dr Desmond Morris, in his book Cat World tells us that the hunting success rate of tigers is about 1 in 20 or 5%. Clearly a poor success rate. He also tells us that a female with cubs has a better success rate because of the urgency to feed her cubs. He puts it at a 1 in 5 chance or 20%. Tiger eating. Photo on Flickr and by Tambako The Jaguar The internet tells me that the success rate is 10% or between 5% and 10% depending on the source. However way you cut it, the success rate is low. This accounts for why tigers are careful eaters leaving little of its prey for scavengers. And they gulp down as much as 30 kg or 66 pounds of meat at a single sitting. When it has finished it may stay with the partly eaten body of its prey until it becomes hungry again and then continue. Alternatively a tiger may cover the carcass with leaves and branches hiding it from predators and scavengers. It can then return for a second meal. The tiger also has to travel long distances to find and kill prey
Post a Comment
Read more

How far do tigers travel in a day or night? 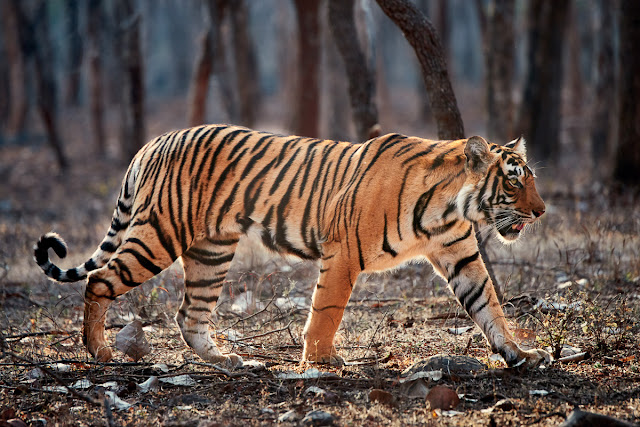 There are few measurements on how far tigers travel in a day or night but they spend a lot of their time searching for food and travel long distances in doing so. George Schaller in his work of 1967 called The Deer and the Tiger estimated the tiger's average walking speed and decided that tigers travelled 16 to 32 km per night in the Kanha National Park.  Tiger in Ranthambore NP, India. Photo in public domain. Soviet researchers followed tiger tracks in the snow and estimated that they normally travelled between 15 to 20 km per day ( The Amur Tiger in the USSR 1980). Others have reported that Siberian tigers in eastern Siberia travelled between 50 to 60 km per day under unusual circumstances.  In Chitwan National Park, a park where tiger prey is or was abundant, tigresses travelled roughly 7 to 10 km per night at a speed of about 0.7 km/h. Male tigers tend to go further than females and it is reported that one adult male in Chitwan travelled the length of his territory using t
Post a Comment
Location: India
Read more

The dichotomy in the human-tiger relationship 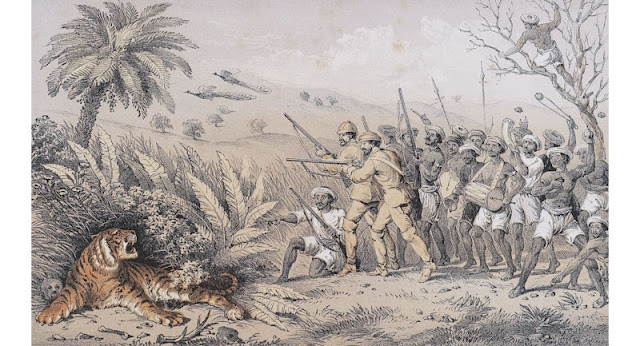 For the past 20 years humankind has known that it has to protect the tiger because the animal is too iconic. It is the most outstanding and high profile wild species on the planet. The dichotomy arrives because the tiger interferes with the innate desire of humans to multiply their numbers, to grow their economy, to pursue their self-interest and to survive. Which objective is the more powerful? Tiger hunting by Col William Rice 1850 in India. Image in public domain. If we turn the clock back to India, where the tiger primarily lives, to 1850, an officer in the army, Col William Rice, shot 158 tigers between 1850 and 1854. Another officer, Col Gordon-Cumming shot 73 tigers in one district over two years. At this time tigers were seen as pests. They got in the way of village life and were seen as evil, destructive and treacherous. Killing them in large numbers was acceptable and indeed necessary. They discovered that it was harder and harder to find and shoot them. Ver
Post a Comment
Location: India
Read more 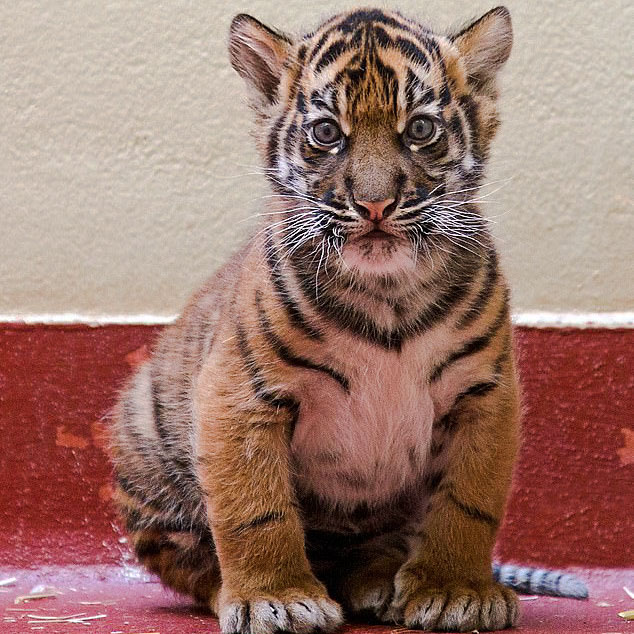 Another bizarre tiger story. A French couple living in France wanted to purchase a high filial Savannah cat which you might know is a serval-domestic cat hybrid. They bought the cat online but were delivered a Sumatran tiger cub instead. Extraordinarily, they did not know that they had taken possession of a tiger until a few days later when they contacted the police. They purchased the animal for €6000. Savanah cats and tiger cubs have a completely different appearance by the way. Tiger cub. Stock image from EPA. The Sumatran tiger is highly endangered. The trade in wild kittens of any species is arguably out of control. There are international treaties (CITES) in place to protect wildlife from this kind of trade but they are unenforced or the enforcement lacks teeth. If it isn't tiger cubs it'll be tiger body parts which are traded to feed the traditional Chinese medicine market in China. Lion bones are also popular which causes no end of lion abuse in Africa. This rather o
Post a Comment
Location: Sumatra, Indonesia
Read more

Joe Exotic says that a penis pump exhibit was for tigers

This is a bizarre story but aren't they all bizarre when they come from the Joe Exotic book of life . Just to remind you, Joe Exotic is the former owner of a private in America where he kept hundreds of animals including a large number of tigers and lions and indeed other big cats. He planned to murder Carole Baskin (BCR founder) and has ended up in jail for 22 years. He is one of four "Tiger Kings" all of whom have been charged for animal cruelty. All four owned private zoos and allegedly exploited tigers and/or lion cubs . Image: PoC from pictures in the public domain. Moving forward, a Las Vegas museum is exhibiting a penis pump which they claim belonged to Joe Exotic. He denies it saying that he never needed a sex aid and that is sex drive has always been strong. He is gay and he is known to have lived with two husbands when he wasn't locked in prison. He claims that Geoff Lowe who took over his private zoo in Oklahoma made up the stories about items collected
Post a Comment
Location: Oklahoma, USA
Read more

Tigers are on the whole very good tempered

On the whole, tigers are well tempered creatures disinterested in attacking people. They prefer to avoid humans and normally give them a wide berth. Even if they are provoked they will growl back and if provoked further they may rush at the person combined with a loud roar but they will not attack. Their intention is to avoid attack and to see the person off. Occasionally a tiger may object to a person approaching too closely to her cubs or to their kill that they are guarding. But one of the great so-called big-game hunters of that era, Jim Corbett, said that if a person is attacked by a tiger the blame rests with the intruder. Champawat tiger. Image in public domain due to lapse of time. It is said that if tigers and lions which attack people in an unprovoked manner it is possibly or probably due to the fact that the tiger is injured and unable to successfully bring down a typical prey animal. They therefore have to resort to much easier prey i.e. the human. This topic is relevant
Post a Comment
Location: Chandrapur, Maharashtra, India
Read more

Carole Baskin, the founder and manager of Big Cat Rescue in Florida is a genuine animal advocate and conservationist. She has many critics because she's an outspoken person but I am one of her supporters and admirers.  Doc Antle. Screenshot from video. I believe that she is genuine and she's good for big cat welfare. She's been trying to push through animal welfare law to protect big cats in America where they are kept as pets and where tiger and lion cubs are exploited in roadside zoos for photography and petting sessions. She is behind the Big Cat Safety Act which has been introduced into the federal legislature. One of the biggest exploiters of that money spinning business was exotically named Bhagavan "Doc" Antle. He was (his time has come to an end) one of the big four "Tiger Kings", all of whom have been indicted for animal cruelty. He owns the Myrtle Beach Safari in South Carolina.  Carole Baskin. Photo: BCR. Carole Baskin believes that Antle
Post a Comment
Location: 12802 Easy St, Tampa, FL 33625, USA
Read more 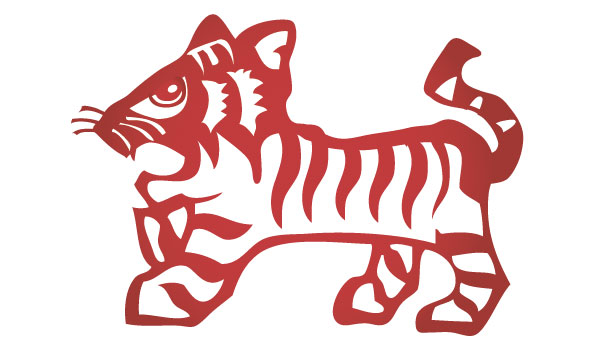 This is about the Chinese Zodiac and the year of the tiger. The Chinese Zodiac is a classification scheme. It is based on the lunar calendar. It assigns an animal to each year and as there are 12 animals assigned after 12 years the cycle repeats. The 12 year cycle equates to the 11.85 year orbital period of Jupiter. The 12 Chinese horoscope animals are: Rat, Ox, Tiger, Rabbit, Dragon, Snake, Horse, Goat, Monkey, Rooster, Dog, Pig. As you can see the tiger is the third in the list. The years of the tiger include: 1914, 1926, 1938, 1950, 1962, 1974, 1986, 1998, 2010, 2022, 2034. We know the attributes of the tiger namely: courage, bravery, force, fearfulness, power and dominance. The emperors and kings of ancient times were compared to tigers. Tom Cruise was born in the year of the tiger. He was born in 1962. People who believe in the Chinese Zodiac, and I presume many Chinese people do, believe that people born in the year of the tiger are brave, competitive, confident and unpredicta
Post a Comment
Location: China
Read more
More posts