Showing posts from August, 2022
Show All

This is a video taken from what appears to be a bus or some other tourist vehicle in India. A bull is trotting down the road in a rainstorm towards the vehicle. The tiger is about 20 yards off the road to the left.  The tiger sees the bull and goes in to attack it. The bull in showing courage confronts the tiger at speed. The tiger backs off and the bull carries on its way.  This looks unusual because we are told countless times that tigers can pull down a cow fairly easily but there is something a bit different about this bull! It is wearing a mask. And the mask is white.  Image: MikeB Perhaps it was used in some sort of ceremony and I wonder whether the tiger became concerned because they could not recognise what would be for them a typical prey animal. Perhaps the tiger decided that he had not seen this kind of prey animal before and then decided that it might be dangerous and so backed off. That is my assessment of why this happened. The video quality is poor but the content is int
Post a Comment
Location: India
Read more

Could a Siberian tiger survive in Alaska? 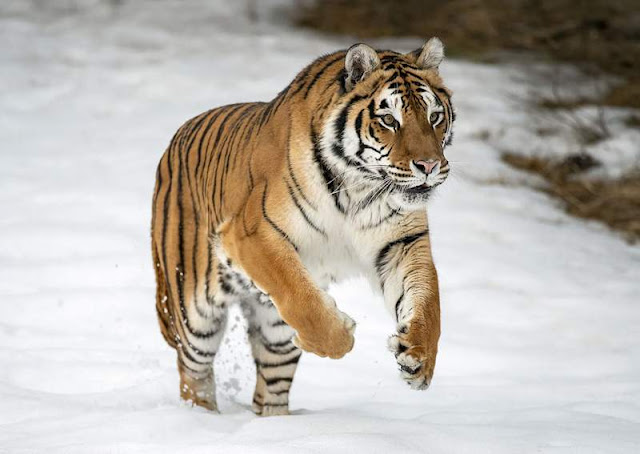 This is a hypothetical or theoretical question. Certainly, yes, Siberian tigers could easily survive in Alaska in terms of the seasonal temperatures. Alaska appears to be warmer on average than Siberia and Siberian tigers live in Siberia! It is just a question of whether there is sufficient prey animals in Alaska. And I think the second point is the one which would make it difficult for a Siberian tiger to survive in Alaska. And whether they'd be left alone and not persecuted or hounded as tourist attractions by humans. Siberian tiger. Image: Britannica. Around three quarters of Alaska is described as sub-Artic and therefore it lacks the habitat and prey animals required to sustain a Siberian tiger. If that is true, then the remaining quarter is acceptable in terms of supporting Siberian tigers and I'm sure that a quarter of Alaska is still a very large area! One person who commented on this topic said that Siberian tigers have an enormous area in which to live i.e. Siberia, bu
Post a Comment
Location: Alaska, USA
Read more

Why are Siberian tigers so big? 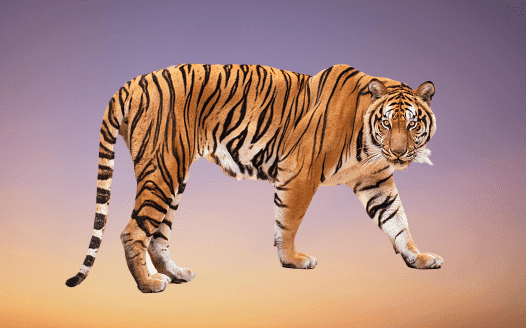 This one is an easy question to answer. It is to do with evolution. So, you have to believe in Darwin's theory of evolution to believe the answer. Siberian tigers live in colder climates than Bengal and Sumatran tigers. They live in the far north, in fact, the far east of Russia near Vladivostok. They live in the snow and birch tree forests.  Siberian tiger. Image: MikeB They need to be able to protect themselves against the extreme cold which is why through natural selection they have evolved to be bigger because this gives them a smaller surface area-to-volume ratio which helps to reduce heat loss from the body of the animal. As more body heat is conserved, they are warmer which helps them to survive. Evolution is an act of survival. It is known as Bergmann's Rule. So, animals living in the North of the planet where temperatures are considerably lower will generally be larger. Conversely, animals living near the equator will be smaller and this applies to the Sumatran tiger w
Post a Comment
Read more

Puli Kali - an irreverent look at a tiger festival 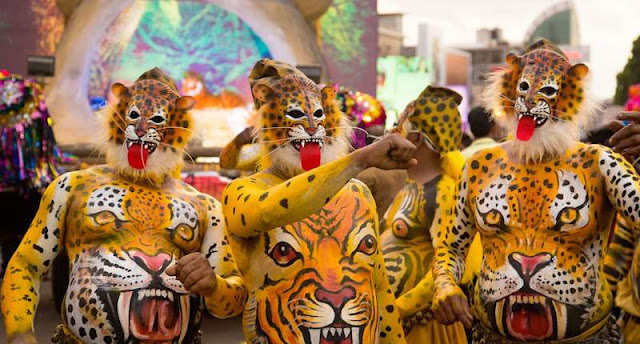 Puli Kali is a festival, as I see it, in celebration of the tiger which takes place in Kerala, India. The name of the festival appears to be spelled in two ways. The way that I have spelled it in the title and as follows: 'Pulikkali'. It literally means "the tiger dance". Or it might mean "leopard game", depending upon your interpretation. It seems to be the only major tiger festival in India. Or the only one reported on and searchable on the internet. Puli Kali. Image: S & S Pulikali Sangam Kanatukara DESOM The festivities take place on the fourth day of Onam celebrations. This is an ancient festival going back over 200 years. And only in 2016 did the organisers invite women to take part 😎. Well, it is India and to be brutally honest, it is somewhat of a misogynistic society or culture. There have been some horrendous reports of rape of women by gangs of men. But that is another story.  Puli Kali - an irreverent look at a tiger festival. Image in publi
Post a Comment
Location: Thrissur, Kerala, India
Read more

How much meat does a tiger eat in a year? 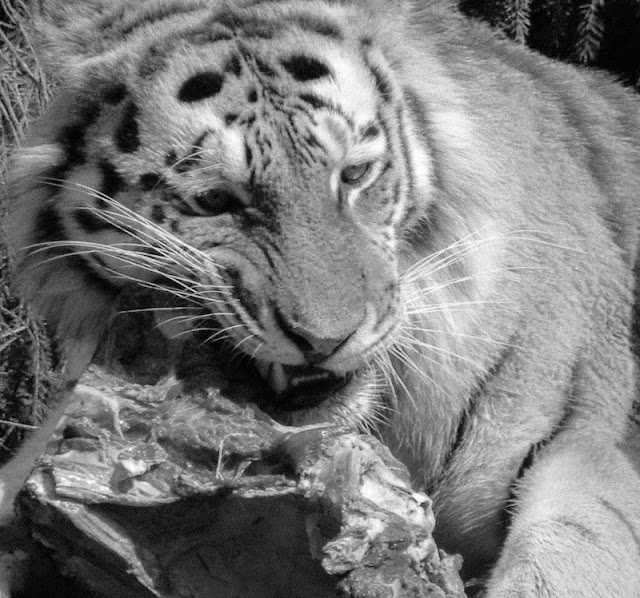 I am fortunate enough to have some data on this topic provided by Mel Sunquist in his work dated 1981: The social organisation of tigers in Royal Chitawan National Park, Nepal . The Information is also published in his book Wild Cats of the World, published in 2002. The calculation goes as follows. Each tigress makes 45 kills annually and eats 46 kg of meat at each kill. This results in an overall annual figure of 2070 kg of meat consumed. Fiona Sunquist, his wife, decided that the figure is "probably realistic, as it is similar to the amount of meat fed to zoo tigers: 5 to 6 kilograms per day. Tiger eating. Photo: Pixabay. They also state that non-reproducing female tigers require an average of 3.7 kg per day. Male tigers require an average of 4.8 kg per day as researched by ES Dierenfeld in 1987 in their work Nutritional considerations in captive tiger management, in Tigers of the world: The biology, biopolitics, management, and conservation of an endangered species . Tigers do
Post a Comment
Location: Chitawan, Nepal
Read more 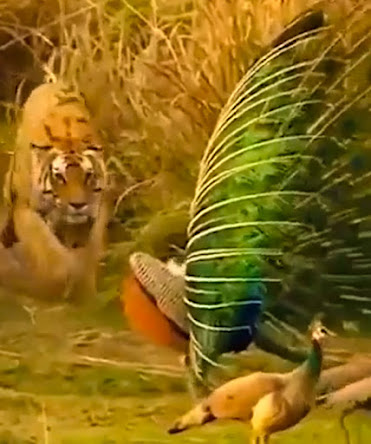 INDIA: Okay, a bird is an animal but you get the point. It is both a neat but brutal video. Fortunately, the magnificent Indian peafowl, Pavo cristatus , escaped the equally magnificent 'Royal Bengal tiger' aka the Bengal tiger. Not sure why they bother to call it royal. Technically this is a Bengal tiger. The bird and cat are bound to meet from time to time in India. The Bengal tiger is critically endangered. Its population - mainly in India - is pretty stable but very low. You can find out all you want about the Bengal tiger on this website so please feel free to search.  I will dip my toe into information about the Indian peafowl. It is also known as the common peafowl and blue peafowl. It is native to the Indian subcontinent. Although it has been introduced to many other countries. The male of the species is referred to as a peacock and the female is referred to as a peahen. Colloquially they are both referred to as peacocks. Bengal tiger attacks India's national bird t
Post a Comment
Read more 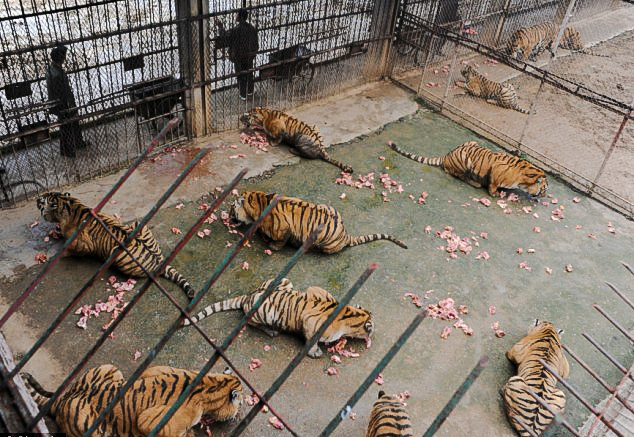 Traditional Chinese medicine is a major contributor to making the tiger extinct in the wild and the President of the country, Xi Jinping, supports and praises the medicine despite it being based on ancient superstitions. He thinks that it a good thing. But ancient medicine is bad medicine. Medical knowledge has grown hugely but traditional Chinese medicine is rooted in the past when there was little knowledge. It is therefore a fake medicine. It was first used in around 2,200 years ago when the world was relatively ignorant. It still bloody well is. Horrible, degrading tiger farms. Completely disrespectful of the magnificent tiger. Image in public domain. Peoples of the world have a duty to respect the cultures of others. Yes, I agree but not if that culture severely damages the planet and the animals that live on it. When this happens, we have a duty to criticise and try and change a deviant culture. One of the great problems of modern-day people is that some cultures are rooted in id
Post a Comment
Location: China
Read more 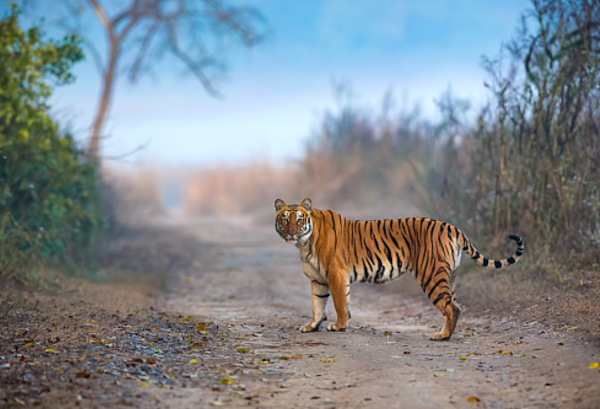 In Chitwan National Park, in the far north of India, almost on the foothills of the Himalayas, radio tracking of the Bengal tiger showed that tigers often hunt while moving slowly along roads and trails. They do this because it allows them to move quietly and they don't have the added burden of having to push through dense grass and brush (as reported by Mel and Fiona Sunquist in their book Wild Cats of the World ).  Tiger on a trail in a tiger reserve in India. Image: Pixabay. Tigers have been observed to hunt like this by many naturalists including Dunbar Brander, who recorded his observations in Wild animals in central India published in 1931. His description in his book is particularly apt according to Mel and Fiona Sunquist: "The usual daily round of a tiger is to commence questing for food shortly before sunset and to continue doing so all night. In this questing, they go at a slow walk often following the beds of nalas and jungle roads, especially so in the cold weathe
Post a Comment
Location: GFM2+JXW Chitwan National Park, Sonepur 44200, Nepal
Read more 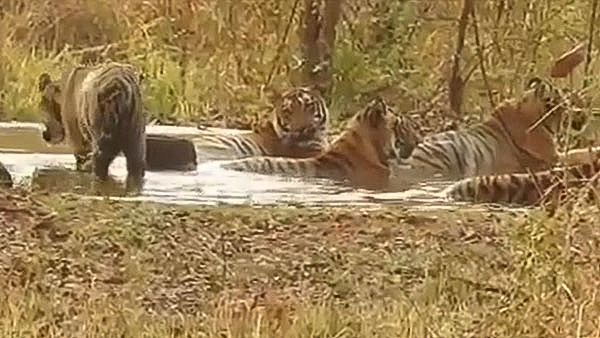 Bearing in mind global warming and also bearing in mind that tigers love water, it is unsurprising to see a party of them lounging around in a nice pool in a reserve. The wildlife ranger who posted the video to Twitter via a colleague says that river sources sometimes start in tiger reserves and therefore tiger conservation in India is key to their water and food security. What I think he is saying is that if you protect the Bengal tigers in India you by necessity protect their reserves and in protecting the reserves you protect the water source which keeps billions of Indians alive! Does that sound right? Our tiger reserves are source of water to billions of Indian’s as many major river originates from them. Success of tiger conservation in India is key to our water & food security. Here a family of the big cat enjoying the onset of monsoons 💕💕 (As received from a colleague) pic.twitter.com/cnIk5A8ud2 — Susanta Nanda IFS (@susantananda3) August 9, 2022 Note : This is an embedde
Post a Comment
Location: India
Read more 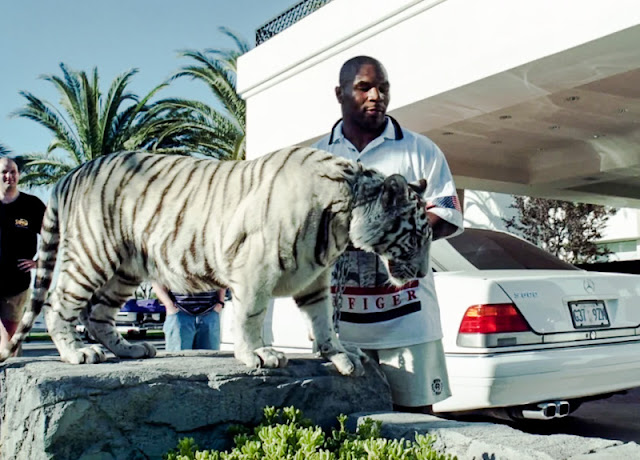 When Mike Tyson was released from prison in 1995 after a three-year stretch, he was talked into buying a white Bengal tiger for around $65,000. In all he owned three white Bengal tigers over a period of time. He lived in Las Vegas at the time in between two houses and in one was a businessman who kept dogs. One day he was walking his Bengal tiger on a leash like a pet and the tiger saw the dogs. It jumped up onto his neighbour's property's wall to attack the dogs to eat them. The owner of the property saw this and Mike Tyson managed to pull the tiger down. Good old Mike used his innate strength to good effect. Mike Tyson with at pet white Bengal tiger in 1989. Credit: Getty - Contributor It seems that the property owner telephoned the ASPCA about it and they came around to Mike Tyson's home and told him that he was not allowed to keep the tiger in captivity. Clearly in Las Vegas you need a licence to keep a tiger. That isn't the case across the whole of the USA but it p
Post a Comment
Location: Las Vegas, NV, USA
Read more
More posts