Showing posts from March, 2014
Show All

Man-eating Tigers Should Be Captured Not Shot 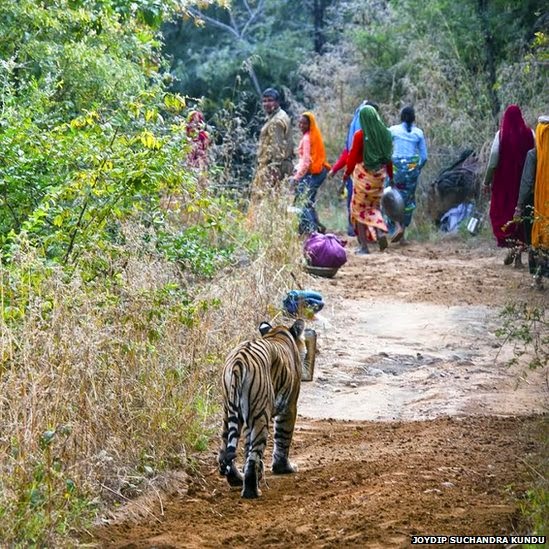 Surely capturing a tiger that has killed a person or persons is the more humane and reasonable way to deal with this sort of problem. If the tiger kills a person it is probable that the tiger is old or sick or for whatever reason is unable to kill its usual prey. The tiger does not naturally hunt people. So, for example, perhaps a tiger was injured by a person and perhaps people have encroached on a tiger's habitat squeezing the tiger out. There may have been a case of mismanagement of the tiger. This looks ridiculous to me. Tiger forced to be in close proximity to people working in Ranthambhore National Park. For example, a tiger may have been relocated from one reserve to another and he or she finds it difficult to create his own home range. He is forced out onto the borders of a reserve where he encounters people. There are numerous possible scenarios for a tiger to encounter a person under which the tiger is not at fault . As the tiger is not at fault why should he be
Post a Comment
Read more

Tiger's Bite Is Much Stronger Than A Lion's Bite

- March 22, 2014
A tiger can bite with a force of up to 1000 pounds per square inch. This is about 10 times more powerful than the bite of a human. The lion's bite is 600 pounds per square inch.  This video explains:- This information is important in only one respect really and that is the argument about who wins  in a lion versus tiger fight. The bite strength is only one factor, of course. There are many other factors such as the individual weight and size of the lion or tiger. Also, individual cats will vary in their personalities and aggression levels. Incidentally, tigers are generally larger and heavier than lions. The Siberian is the largest cat (excepting man-made hybrids such as the Liger) I have a page on the lion versus tiger debate which also contains links to many other contributions from visitors. In a long-running poll visitors voted marginally in favour of the lion. However, the argument is academic because these two top predators do not meet in the wild. They may meet in zoo
Post a Comment
Read more

- March 22, 2014
A lion won this fight but there is an endless discussion on the internet about who is the better fighter and who wins the lion versus tiger fight . It is very rare for a lion to fight a tiger and if they do it will probably occur in a zoo as happened in this case and very often the fight that you see is not a genuine fight but more just a skirmish with one cat batting the other. However, in this instance a lion killed a tiger at a zoo in Jeonju, North Jeolla Province, South Korea.  A 5-year-old lion fell into a trench that was below his yard. He was trying to catch a chicken that the zookeeper had thrown to him. Next to the lion's pen was apparently a tiger cage and a 6-year-olf female tiger was able to jump into the trench. This seems to be an example of mismanagement by the zookeepers to me in allowing this to happen. In any event, although the lion and tiger were similar in length, the lion was a little heavier (by 20 kgs) on this occasion and the tiger when landing in th
Post a Comment
Read more 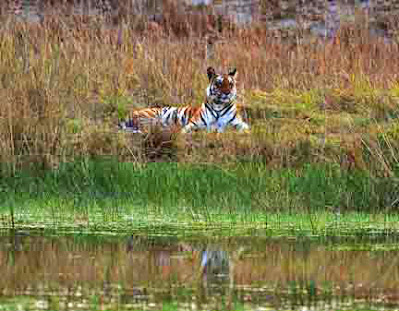 It is claimed by Valmik Thapar that there is too much interference with the wild tiger in the Indian tiger reserves. The main culprits are the forest managers. The sort of interference that takes place is: Artificial feeding of orphaned cubs until they are adults; Providing food to injured and slightly injured tigers to help in their recovery; To sedate injured tigers with tranquiliser guns and then treat them with antibiotics; To relocate tigers and manhandle them once they are tranquillised. Relocated tigers are often followed and chased in order to confine them to a certain part of the forest. Many people are employed to force them to change direction using noise reminiscent of the days when tigers were hunted and driven into the guns of professional or paying hunters; To artificially bait the tigers. Apparently, this increases their longevity as it makes them easier to watch and to photograph; We are also told that on occasions water tankers are employed to provide water to
Post a Comment
Read more

Tiger Bone Glue That You Eat! 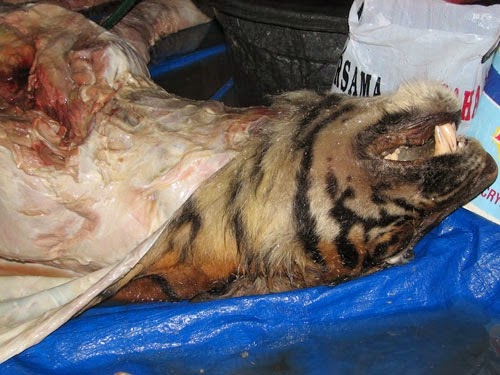 Tiger bone glue “is very strong in enhancing your masculinity". It is another one of those rather bizarre products that you can buy in Asia created out of tiger bone. There are other products created from the body parts of tigers, a highly endangered species , in part because some people in Asia like to eat bits of it. This is where you get your tiger bone glue comes from! Tiger bone glue is particularly odd to me because you would have thought that you would stick things together with it. No, you eat it. A lot of tiger products are geared up to improve masculinity. Perhaps the most notable is the tiger penis . A whole one is worth about $6000 (the last time I checked).  I have no idea how this is eaten. It is probably ground up and put into something or other and then consumed. The market in tiger bone products is very lucrative . One 10th of a kilogram (about one fifth of a pound) of tiger bone glue costs about $140. Because the market is so lucrative is open to corrupti
Post a Comment
Read more

- March 21, 2014
The Sanjay Gandhi National Park scheme to allow individuals to adopt captive lions, tigers and other animals within the park has been revived. The purpose of the scheme is to attract more visitors to the park by making them more interested in the animals. The objective is laudable but I have a strong feeling that the price of adoption is far too high. Tigers - Sanjay Gandhi National Park by Ipshita B  If an individual or a company were to adopt a lion, a tiger or a white tiger they would have to fork out about Rs.3 million which is about US$50,000. For that generous donation the adopter adopts let's say a tiger for a year. The amount paid is non-refundable and the state continues to own the tiger. The adopter has his name put on a plaque outside the cage and he can visit the the adopted tiger once per week. There will be no additional charges, understandably, when he or she participates in the scheme. That more or less sums up the scheme. If anybody reads this post I wonder
Post a Comment
Read more

I would like, briefly, to talk about tiger bone. In fact, any part of the tiger will do. Pretty much every part of the tiger has a value and some parts are extremely expensive. It is all about supply and demand. The tiger's bones are ground down for tiger bone wine. It is also used in a number of medicinal concoctions that are claimed to treat such things as: fright, dysentery and ulcers. It is also used to ward off the devil if you have a bath in it. The extinction of the South China tiger is substantially due to the market in tiger bones. Tiger farms in China produce the tigers and sell the wine. The tiger is subject to market forces. It is a product. Tiger Product Price $ USD per Kg Place Date Bone 130 Nepal 2002 Bone 130-175
2 comments
Read more
More posts